You are here: Home1 / past Lexicoms2 / Lexicom 2004: Copenhagen Business School 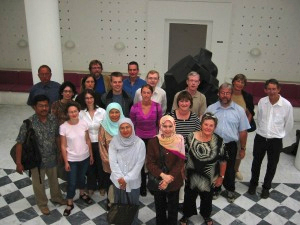 [This article appeared in Kræmmerhuset, the in-house journal of Copenhagen Business School. Reprinted here with kind permission of the authors.]

Do you realise that you use the skills of a lexicographer more often than you brush your teeth? Lexi…what? Lexicography — the process of writing, editing, or compiling a dictionary. Over the last couple of decades it has undergone enormous changes thanks to modern IT. These changes are not merely advances in medium with traditional paper dictionaries being converted into electronic dictionaries. They include entirely new ways based on sophisticated methods of collecting the data that go into dictionaries. The result makes dictionaries much more representative of the way a language is spoken.

The ultimate goal of lexicography has remained the same: the best possible information for the specific user of any dictionary, arranged in the best possible way for that user. It is here that the potential has really advanced, not only by virtue of modern technology, but through inspired and creative theories by specialists in the field. These theories were recently demonstrated at CBS by the renowned lexicographers Sue Atkins, Adam Kilgarriff and Michael Rundell.

These three experts, who are based at the Information Technology Research Institute at the University of Brighton in England, were invited by Lise-Lotte Hjulmand, head of the Department of English, to run a one-week MasterClass seminar at CBS in August. “Atkins, Kilgarriff and Rundell have an outstanding record of innovation and a portfolio of experience in the production of dictionaries so we were very keen on organising a LEXICOM seminar at CBS,” said Hjulmand. Arnt Lykke Jakobsen, head of Open University at the Faculty of Languages, Communication and Cultural Studies, negotiated the project and The Language Center at CBS handled the course administration.

The course hosted twenty participants from many countries, including Iceland, Malaysia, Ireland, Greece, Croatia, and Sweden. The participants ranged from academics to employees of EU Institutions, publishing houses and the electronic communication businesses. Although the daily programme was heavy, the atmosphere throughout the week was lively and engaging,

Lectures took the participants from lexicographic basics to sophisticated computer tools for squeezing regular patterns, also known as word sketches, out of large corpora, and to the intricacies of designing frameworks for dictionary entries, alternating with sessions of practical work in groups or individually at the computer.

The MasterClass touched upon the relevance of linguistic theories as tools in lexicography, as well as the future of the dictionary and the dictionary of the future. Of course, the greatest by-product of this type of seminar is the network that was generated among the participants. Several PhD students were able to join the seminar and work side-by-side with seasoned veterans in the field.

The Faculty of Languages, Communication and Cultural Studies looks forward to hosting this MasterClass again in the future. “Everyone involved has been very pleased with the success of this special seminar – the participants, the trainers and the CBS Language Center,” adds Hjulmand. “CBS is the ideal venue for this type of advanced level training in language for specialized purposes.”