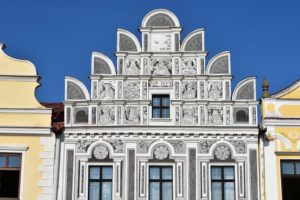 A personal account of Goulchat Safiullina, Kazan Federal University, the Republic of Tatarstan

The 15th anniversary of the Lexicom was marked by the unforgettable scene of Telc – a UNESCO World Heritage site, the Czech Republic. The venue was carefully chosen by the organizers and the workshop took place in the former Jesuits’ college building, located on the main square of a 13th century town. The spirit of the place contributed to the atmosphere of academic discussions. Lectures and classes on lexicography were held by one of the three Lexmasters` demiurges – Michael Rundell. Corpus linguistics was presented by Miloš Jakubíček and Vojtěch Kovář, who successfully continued the traditions of thematic lectures and practical classes established by Adam Kilgariff, whose untimely passing reminds us of the beauty of the current moment and to appreciate the depth and scope of the Lexicom Workshop`s theoretic and practical coverage during the last fifteen years

The Sketchengine team is worth of separate mentioning: computer linguists of brilliant education, vast knowledge and courteous friendliness. Eight specialists maintain and develop the program, without which nowadays it is difficult to imagine lexicography industry and corpus building.

The participants of the workshop enjoyed all the spectacular places of the town of Telc, the castle, the Tower, the lakes, surrounding the Hradec Square during the breaks; and all the delicatessens of Czech cuisine, the traditional Czech melodies accompanied by charming violin and guitar performance of the Sketchengine representatives during the course outing to Znojmo. The sphere of the academic interests of the workshoppers is impressively diverse: comparative linguistics, applied linguistics, corpus linguistics, historical linguistics, dialectology, lexicography, etc. The projects on Scottish, Swahili, Czech, Slovak, Bulgarian, Arabic, Persian, Tatar languages, and a Northern Italian dialect received an impetus for further progress, whereas some new multilingual projects were started in fostering atmosphere.

Lexicom 2015 surpassed all my expectations, I would love to attend the workshop in 3-4 years to follow the development of the multiple functions of the Sketchengine and join in the world of fundamental lexicography and to see all the participants once again. Lexicom alumni, unite!

Lexicom 2016 US: University of Colorado Boulder, USA
Scroll to top