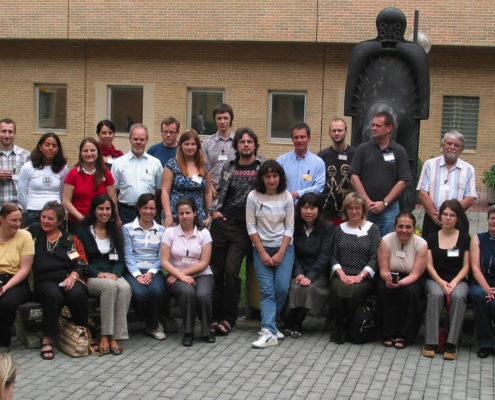 Why would the Brno 2007 Lexicom attract people from 13 countries – Romania, Slovakia, the Czech Republic, Hungary, Latvia, Sweden, Germany, Spain, Poland, Ireland, United Kingdom, Portugal, and even Taiwan? Why would these people, representing sometimes very different professional backgrounds like computational linguistics, research, language teaching, translation or publishing management, want to attend the workshop? Well, probably because each one of them, a language learner and therefore a dictionary user, be it either due to their occupation or, perhaps, out of sheer curiosity, had once asked themselves the question: how are dictionaries actually made? And finding out that dictionary-making is called lexicography, thought it might be a good idea to learn more of it from the very best in the trade, the true lexicographic icons – Sue Atkins, Michael Rundell and Adam Kilgariff.

First and foremost, the 2007 Lexicom proved a most useful experience. Hosted by the Masaryk University, the intensive five-day workshop in lexicography and lexical computing was a combination of seminars on theoretical issues and a series of practical sessions held at workstations. The topics of the theoretical classes varied from corpus lexicography to Frame Semantics. The most essential aspects of modern lexicography were neatly covered. We had an ideal opportunity to learn, for instance, about designing and building a lexicographic corpus, using the Web-accessible corpora as well as utilizing the Web itself to build a corpus from it, structuring dictionary entries by analyzing corpus data to find the word senses in them (his invaluable experience of a dictionary writer and editor, Michael Rundell shared with us), and constructing entries by applying the principles of the above-mentioned Frame Semantics, which Sue Atkins presented to us with such overwhelming competence. And competence was indeed the quality, and I mean QUALITY, that was instantly observable in everything, be that the instructors’ professional expertise or the materials we had received before and at the workshop, or the overall organization of the event.

But, above all, the workshop was a hands-on experience, a series of classes held in one of the very well maintained Masaryk University computer labs where we were able to put theory into practice, check for ourselves how things work, and if they work indeed!

Learning how to use Adam Kilgariff’s Word Sketch Engine was both a thrill and a challenge, and proved extremely useful for the painstaking activity of corpus querying to extract the most frequent word usages and the right word senses when writing a dictionary entry. The fruits of our strenuous efforts were then presented and discussed open-class, with judiciously worded, constructive feedback from our instructors, which most of us were perhaps most expectant, and at the same time most anxious, to hear – everyone wanted to do their part the best they could.

Furthermore, the LexMC trainers had invited a very special guest, Patrick Hanks, to give a seminar on verb pattern analysis in corpus data, and a speaker from TshwaneLex, Gilles-Maurice de Schryver, who presented the probably most advanced dictionary writing system today.

And yet the Brno Lexicom proved an unforgettable experience not only because it was packed with practical and theoretical knowledge, but for quite other reasons, too. Being the ancient capital of Moravia, and the Czech’s Republic second city, Brno, the workshop setting, exhibited all its natural and architectural beauty at the time. The streets lined with linden trees took me every morning from the suburbs where my hotel was right to the workshop venue. And I preferred to walk rather than use the city’s (otherwise efficient) public transport so that I could fill my lungs with the great lime-scented air. And much could be said of Brno’s historical architecture, the castle hill, or the old wine cellar where the workshop organizers invited us to savour the rich taste of Moravian tradition, and, well… Why not another Lexicom, and why not in Brno?!